I present below a complex, mysterious, and fascinating set of 15 French postcards published in 1900. It is a series on the theme of the woman lawyer published by a printer called Royer in Nancy, with the photos and design by a Nantes photographer, Morinet. [Apparently, the printer Royer still exists.] As can be seen from the translations below, the cards gradually lay out what is on its face a strong feminist manifesto, advocating for women to be accepted as lawyers, as well as for equality for women more broadly. Notably, the series was published in a historical context in which there were many sexist caricatures of women lawyers, due to the passage of a law on December 1, 1900 authorizing women to join the Paris bar. It should also be mentioned that there are some oddities in the series, including a sequence in which legal proceedings are interrupted so the attorney can nurse her child. In the mind of one French commentator, this raises the question whether the series is intended as satire, although I personally tend to believe that the feminist sentiments are sincere.

The one site I’m aware of that seriously discusses the series is a University of Rennes, France webpage that presents the collection (untranslated) with some commentary. [This blog also presents the postcards in French, without commentary.] In terms of historical context, the University of Rennes site explains (in translation): “The series relates to the times, since Mlle Jeanne Chauvin (1862-1926), Doctor of Law since 1892, teacher, and feminist activist, was registered with the order of lawyers of the Paris bar in 1900. She sought to be sworn in to the Paris Court of Appeals in 1897, but she was refused because the law did not (explicitly) authorize women to exercise this manly profession. The various steps she took all failed until the law of December 1, 1900, which, supported by R. Viviani (French statesman: premier of France 1911–1915) and R. Poincaré (French statesman and doctor of law), repaired the injustice by explicitly authorizing women to become lawyers. Jeanne Chauvin, registered with the bar on December 9, 1900, was sworn in on December 19, preceded by a short bit of time by Mme. Petit-Balachovsky (registered on December 4, 1900 and sworn in on December 13th).” Here is a drawing of Jeanne Chauvin. Here and here are French sites with a little more information about her.

The University of Rennes site appears to view the series as satire. It states (in translation): “There were strong misogynous reactions to the law of December 1, 1900 and many parodies and caricatures, as this series illustrates. [¶] This series thus has no goal other than the one in Aristophanes’ Lysistrata: it isn’t about giving value or empowering women; it’s about damning men (see card 15). [¶] The themes of mercantilism (5), moral corruption (13), business and government (14, 15, and 6, stating that even women can claim the highest public functions), of national debt (14), strikes, and city planning as just so many plagues, and finally the underlying anti-parlementarianism, belie the ‘Belle Epoque’…. [¶] The exaltation of feminine virtues is ironic with the reference to ‘an idiot or horrible monkey’ (5) or when the child’s cries interrupt the plea pro domo or parody of plea (8 & 9)—motherhood continuing to define women in this context.”

I view the series a bit differently. If intended as satire of the feminist position, the series is surprisingly convincing and powerful (if strident in tone). Unquestionably there are portions that are quite problematic, but it is possible that those were misguided and dated attempts at humor. Some native French speakers that have read the series have told me they think the feminist message is sincere, and the caricature is of men. I have managed to collect all the cards in the series and posted them below, with translations.

By way of comparison, here and here are some offensive caricatures of women lawyers and deputies. And here and here are more positive postcard images. There is also another series, post-1904, of which this card is an example, that seems to be a weak imitation of the Morinet series. Finally, this site presents a series with positive portrayals of women in various professions.

It would obviously be enormously helpful to know more about the photographer and especially the author who wrote the text on the cards, although information is hard to find. The designation “Cliché A. Morinet” suggests that A. Morinet is responsible for the series. The French “clichés” were a common type of card that presented, often in series, images of different occupations, etc. One prominent maker of clichés was G. Morinet — this site describes series he designed for the printer Bergeret. Here and here are publicity cards for the Morinet studio in Nantes. It seems probable that A. Morinet was a relation of G. Morinet.

I’d love to hear any of your views about this series in the comments. 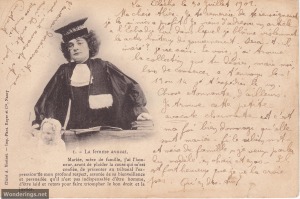 “1. The woman lawyer: I am married, with children, and have the honor, before pleading the cause that is my responsibility to plead, to present my profound respects to the Court. I am certain [the court] is well-meaning and that it is not obligatory for one to be a man, ugly, or vicious in order for law and justice to triumph.” 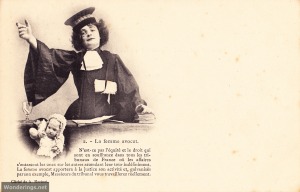 “2. The woman lawyer: Are not fairness and law suffering in all French courts where cases pile up one after another, all of them awaiting their hearing for indefinite periods of time? The woman lawyer will bring justice to her profession and, galvanized by her example, the men of the Court will finally really do their job.”

“3. The woman lawyer: Woman is the epitome of devotion. Woman is the tender and compassionate heart of all misery. It is up to her, by dint of her very nature, to take on the magnificent role of defending the weak, the widow, and the orphan.” 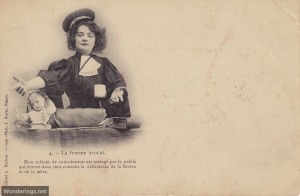 “4. The woman lawyer: My office is overrun by people who find that my advice is imbued with the sensitivity of a woman and a mother.”

“5. The woman lawyer: her plea pro domo. We are accused of not staying in our role of mother or housewife. But to become a mother, you have to find a husband. And who will marry a woman without a dowry? When men marry they first check out the dowry and they’d marry an idiot or an ugly monkey in order to have a big one.” 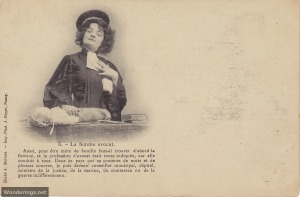 “6. The woman lawyer: Thus, in order to be a mother you first have to become rich. Being a lawyer is the perfect thing because it leads to everything. In this country where words and pompous phrases suffice, I can become a local official, a deputy, minister of justice, of the marine, of trade or of war indifferently.”

“7. The woman lawyer: How lovely woman’s role in the past! Slave and martyr whether in the wealthier classes or the poorer ones where their exploitation by industry remains an abomination still today.”

“9. The woman lawyer: Would the court be so kind as to suspend the hearing for 10 minutes. My heir is screaming of hunger.” 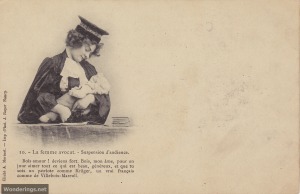 “10. The woman lawyer: Suspension of the hearing. Drink my love. Drink my soul, so that one day you might love all that is beautiful and generous and become a patriot like Krüger, a true Frenchman like Villebois-Mareuil.” [Interestingly, as is evident from the Wikipedia links, both of the men mentioned were known for their association with the South African Boer independence movement, which was a prominent issue at the time, and seemingly an outlet for French rivalry with the English.]

“11. The woman lawyer: Suspension of the hearing: Furthermore, an educated mother will be able to school her son and so he can avoid that ridiculous school life at an age when the child is growing and needs outdoor air and exercise.”

“12. The woman lawyer: I have thus demonstrated that a woman can be an excellent mother and lawyer and that furthermore, becoming a lawyer is the best way for her to find a husband and at the same time a well paying job. I still have to prove that it is necessary for a woman to get out from under lowly jobs and that these Gentlemen are not eagles and in no way deserve their privileges.” 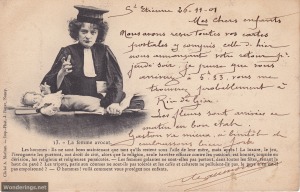 “13. The woman lawyer: Men: Today they’re only worth something so long as they remain under their mother’s wing. But after that! They are driven by lust, gambling and drunkenness. They have the right to be citizens, all the while ridiculing religion, the only effective barrier against these passions and persecuting monks and nuns. Aren’t loose women everywhere, at every ball or party, the center of attraction? Aren’t gambling and horse race betting tolerated and aren’t cafés and cabarets full to the brim? Don’t you think this country is poisoned by all of that?! Oh you men! That’s how you protect our children.”

“14. The woman lawyer: Are men any better in politics? How we despise them when we look at the facts. France is divided into enemy parties that seek to destroy one another. Inflamed class hatred has become the way to govern. The poor are filling the cities and the countryside lacks manpower. Sinecures, concussions, bribes are everywhere. Our debt is growing by billions and billions even though this is peacetime. Because of all the strikes industry is losing its customers, including in France, and the country is going to hell in a hand basket. Men, there’s nothing here for you to be proud of.
I salute the new age: the arrival of women at the helm.”

“15. The woman lawyer: Since men are leading the country in such an entirely wrong way, I have the right to conclude that they do not deserve to retain the privilege of managing public affairs. We, women, will know how to create order out of moral, financial, political disorder. And with the help of God we will create a united France, strong, flourishing, paying its debts. Virtue will be at the top of the pyramid and vice will be vanquished.
And then, we, we won’t be exclusive. We’ll welcome all men of good will wholeheartedly, for our motto is: Justice and equality for women.”

Thanks so much to Irene R. for translations, and to Claudie J. and Bernard D. for their assistance and opinions.